This program, "Death & Resurrection," is an artistic alliance with Master Chorale of South Florida.

A fast-rising star on the international opera scene, Cuban-American soprano Eglise Gutiérrez is blazing her way across the operatic stages of Europe and America with her committed embodiments of the bel canto coloratura heroines.

Proclaimed “Artist of the Year 2009” at Finland’s Savonlinna Opera Festival, in 2010 Ms. Gutiérrez recreated her signature performance in the title role in Lucia di Lammermoor at the Florida Grand Opera and made her debut in this role at the Deutsche Oper Berlin.

More: Olympia Theater at the Gusman Center for the Performing Arts – Tickets & Events

Lorna Salzman, environmental writer and all-around shameless agitator, Suffolk County Green Party congressional candidate in 2002 and in 2004 and seeker of the U. S. Green Party presidential nomination, making no sense that I can see:

What has been smudged over here is the difficulty of replacing the present model of greed, accumulation and exploitation (of resources, markets, and people) with a model in which people readily accept, without coercion, a reduction in consumption, profits and economic expansion. . . . which most environmentalists, ecologists and bioregionalists have been promoting since Earth Day 1970, without success . . .

Without success? Maybe people DO NOT readily accept. Whoda thunk?

Foster (and Hedges) [that would be the University of Oregon Sociology Professor John Bellamy Foster and popular journalist Chris Hedges] presents, regrettably, the notion that ONLY socialism can be the vehicle for achieving this model. . . .

. . . The height of Foster’s blind fealty to an absurd ideology is when he says that only socialism can bring together the ecological awareness with a class consciousness. Again, this notion that a class consciousness must be the foundation for a revolution hits us like a wet dirty mop. Will we never be rid of this antiquated, moth-eaten shroud with the image of 19th century Marx, a shroud that is as credible as the Shroud of Turin?

I find it remarkable but depressing that an informed academic like Foster and a world-travelling journalist like Hedges have not been able in this day and age to entertain even a shred of doubt about socialism. They remain devout worshippers at this shrine, no less deluded than the worshippers at churches, mosques and synagogues who unquestioningly accept the faith and doctrines of their ancestors. The secular faith of socialism seems as unshakeable as organized religion. But it deserves no more public credulity.

Who is left to agree? It was the Shroud of Turin that caught my attention. It was the insanity of the essay that made me want to make you, the reader, suffer along. I have friends that tell me that environmentalism run amok is like a religion. You know, they might be right. Fundamentalism of another sort, as well.

The Blog is called Dear God, this is Kelley.

The subtitle reads, “Did anyone ever tell you not to question God? Don’t comply. Question. Stew. Rant. Rave. Talk. Whisper. Yell. But, never, never walk away before God responds. And God will respond. Are you ready?”

The posting reads, in part:

Is it Robert Powell I picture? The actor who played You in Jesus of Nazareth? Is it the image someone painted from the Shroud of Turin? Or, is it Raphael’s painting I love so much?

Great posting. This is a blog to watch. Dear God, this is Kelley: Face to face

Does anything in the following paragraph bother you? Does everything? 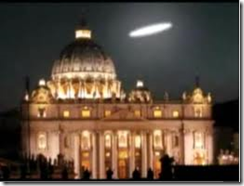 Carl Jung, a Freemason and Illuminati, said: "When Pope John Paul II died, he was greatly mourned by dignitaries worldwide, but also by the world of demonic entities." A huge UFO hovered over the Vatican as he lay in state; it was widely reported in the "mainstream" news. The Vatican is a veritable hotbed of such activity, which should come as no surprise, since the Roman Catholic Church was borne directly out of the Luciferian pagan religions, covering itself with a mere cloak of Christianity down through history, and will be the major player in ushering in the final apostate world religion.

Need we go on with this junk blogging?

How did I find this crap? I came across a blog posting from yesterday entitled, “Singularity Found In The Shroud of Turin.” It pointed to a essay with the same title by Carole Massey Reyner published on her blog about a year ago. It somewhat seemed like a reasonable essay. There were things I disagreed with. And there were glaring mistakes.

The very first two sentences were wrong.She had written, “In 1997 NASA analyzed a 2-dimensional photo of a 2-dimensional artifact, the Shroud of Turin. From ‘somewhere’ there emerged 3-dimensional information – something impossible, according to quantum physicists.”

That is not true. NASA did not examine the shroud in 1997. In 1976, John Jackson and others at the Air Force Academy examined the shroud with the VP8 Image Analyzer, a device  that had been built for use by NASA and other agencies. For the real scoop read an article, “How Image Enhancement May Explain Past Events,” reprinted from NASA’s Jet Propulsion Laboratory’s house magazine, "JPL Universe," dated July 5, 1977. (Now on NASA’a website).

The claim that “3-dimensional information – something impossible, according to quantum physicists,” emerged, is wrong. Anyone with a home computer can reproduce this phenomenon and quantum physics has nothing to do with it. It is amazing, true. As far as anyone knows, no ordinary photograph or painting can be used to produce the same sort of 3D information. A discussion, towards the end of the essay, about the image being a hologram is certainly a misunderstanding of these 3D properties of the image.

Before I posted anything about the article and giving you a change to read it, I came across a link on the same page to UFO DECEPTION SERIES (all caps). It was by the same author. That is where I came across the paragraph at the top of this blog posting.

Do these people with their fringe theories just make up crap as they go.

As Brooklyn Street Art is reporting: 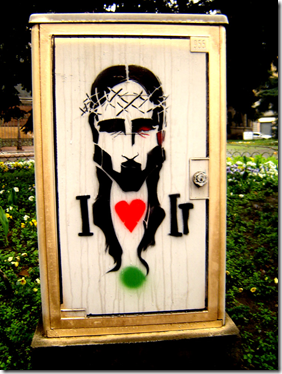 This month Italy commemorates 150 years of unification. In March 1861 Turin became the first capital of Italy after the political and social movement known as il Risorgimento brought together most of the city-states from the Italian Peninsula. Rome was not part of this unification as it was still controlled by the Pope as part of the Papal States. In 1871 Rome became the third and last capital city of Italy.

To mark this occasion Italian artist Angel Cruciani has been busy stenciling numerous cities across Italy with a stylized and nationalistic portrait of Jesus, essentially unifying Church and State. Taking it’s cue from narrow facial lines in The Shroud of Turin, the stencil campaign brings the “Jesus Street” project all over Italy’s plazas and main streets.

John Chen has done some great, new 3D modeling of the Shroud of Turin face. On his blog, he wrote:

The Shroud of Turin is a 14-foot cloth in which many believe Jesus Christ was buried. I watched an interesting doco on SBS tonight about the shroud and how scientists tried to disproof this relic. This inspired me to do a little investigation myself, as the photo that was taken during the examination reminded me of a depth map, used in 3D CGI to generate displacements on an object.

Of course, read his Blog « Visual FX | Animation | 3D – VFXForge.com. And while there, check out some of his other 3D modeling work.

This is an image from his blog based on the shroud face:

What I found interesting was not who this person was, but how the image was transferred onto the cloth in the first place 2000+ years ago?? or as cabron dating suggest 1200 – 1300

We’ll have to get John up to speed on the carbon dating issues.

The news that Christianity would soon die away in many places was all over the Internet recently, particularly on Atheist blogs that were glowing in the light of fallacious happiness. Peter Kirk over at Gentle Wisdom has put the story in perspective:

The BBC has a provocative link on its website “Physics predicts end of religion”. I think even they have realised how stupid that claim is, for the article at the end of the link seems to have been renamed, less controversially, Religion may become extinct in nine nations, study says. Well, at least the BBC is accurate there: that claim is being made, in a study “reported at the American Physical Society meeting”.

In all of the nine nations in the study:

the main religion is Christianity. So the claim is essentially that the church will become extinct in these nations. And most of these nations are similar enough to the UK that any results could probably be extrapolated here – although probably not to the USA where the religious scene is very different.

Read the full article. It is worth your time and reflection: Physics can say nothing about the end of religion – Gentle Wisdom